The guffaw that broke the Internet 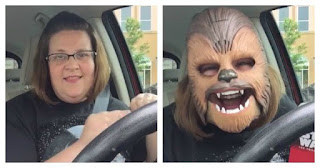 When Candace Payne, a Texan mom of two, slipped on a Chewbacca mask to record her bemusement on Facebook, little did she know that she was on her way to Internet stardom. Candace Payne’s love for the infamous Star Wars Wookie is rivaled by millions, but what was it about her video that got her freebies from corporations and invitations from movie studios, talk shows, and even Mark Zuckerberg?

With so much negativity and fear mongering peddled around the Internet--from climate change and violence to racism and terror attacks--along comes a happy-go-lucky woman who makes a video with her laughing hysterically wearing a Chewbacca mask. While I didn’t find Payne’s video side-splittingly hilarious, her infectious smile and childlike love for the mask made me chuckle. I could see why she had gone viral; her goofy personality and joie de vivre was something that the Internet needed. Her video made us believe that “it’s the simple joys in life” that mattered.

Nothing could be a more effective advertisement for a brand than a bellyful of laughter. But Payne’s video wasn’t a sponsored video, nor did she pay lip service to Star Wars or Kohl’s (which she only mentioned in passing as the store from where she bought the mask) or even Facebook’s Live Video feature. Candace Payne used a Chewbacca mask to talk about how we need to find reasons to laugh in the littlest of things. It was a fortune-cookie lesson on life that Facebook turned into a subtle promotion for their video feature; while for Star Wars and Kohl’s it was a free advertisement for their brand.

Given the short shelf life of an Internet sensation, the three giant corporations cashed in on the video’s popularity. Candace Payne, the content creator, was regaled by celebrities and corporations alike. She went on a car ride with J.J Abrams; met Peter Mayhew, the original Chewbacca; hung out with Mark Zuckerberg; and was thanked for only mentioning Kohl’s with even more goodies and shopping coupons.

She now has a verified tick on Facebook and might become an influencer who will be wooed by several brands, or may be like many Internet trends she will be forgotten by the end of the month. Nevertheless, her sudden fame is proof that digital media helps a brand’s popularity best when it is used by a gleeful consumer. Digital marketing strategists may come up with contests, posters or hashtags to trend a brand, but a simple video or a tweet from a satisfied customer will improve your brand’s image more than a celebrity endorsement.

I set my alarm for 5.30 a.m. on my phone because I like to believe that some day I will wake up, slip into my tracksuit, put my hoodie on, plug in my headphones and go for a jog on a crisp Toronto morning. It has been six months, and I am yet to wake up to the first sound of my alarm. I believe that snooze buttons are the best addition you could think of to add to an alarm clock, they give you the option of postponing the inevitability of going through the motions of a dull and dreary life.

My alarm promptly rang at 5.30 in the morning today, but it being so early in the morning--and a Monday nevertheless--I promptly hit the snooze button and slid back into my comforter, "Let me make full use of my final fifteen minutes of sleep," I mumbled. Fifteen minutes later, it went off again, I checked the time, "Huh? I can always walk in a half-an-hour late into class, nothing's going to change in fifteen minutes," or so I thought, because quite a bit changed by the time it was 6.30 a.m.

It was finally 6.30 a.m. when I finally woke up, and like any normal person the first thing I did was to log into social networking websites to see if anything big had happened while I was asleep. Something big did happen: Schools and colleges had cancelled classes because of a snowstorm. The said snowstorm only seems terrible when reading about it on the internet, because outside there is pretty good visibility. It reminded me of my student days in Chennai when schools and colleges were declared a holiday because the Indian Meteorological Department predicted a Category 5 cyclone, only for the sun next day to be shining bright and beaming. But ironically, all of the Met department's predictions would come true when I started my career, which meant I had to commute to work even if it were pouring buckets.

Waking up to see that classes were cancelled was a feeling I hadn't experience in a gazillion years. A perk of being a student is that the government doesn't want to risk your life in the face of inclement weather, because you are their future, that fresh blood they inject in their economy because you are young, smart and brimming with new ideas (and by "you" I am referring to myself because who's the student here?), it's a different story when you are in corporate because you are the hamster in a wheel. So you gotta go to work come rain or shine.

I felt euphoric initially as I imagined all the productive things that I could be doing, then it dawned on me that refreshing twitter feed, watching TV shows, and staring into an empty word document in the pretext of writing my "novel" was something that I had been doing over the weekend. That was the most "productive" I could get.

I had planned to finally get around doing my sales assignment, which was going door-to-door to stores and selling ad-space for my department magazine, it was something I had been postponing because it involved being confident and charming, and was looking to get it done with by Monday. Now, with even the Po-lice asking denizens to stay indoor and restrict inessential travel, I feel I am only rearing the lazy, procrastinating dirtbag inside of me who likes to stay indoors and watch TV shows.

Well, there are two sides to classes being cancelled on a Monday morning, I guess. But oh, look! The sun's out!